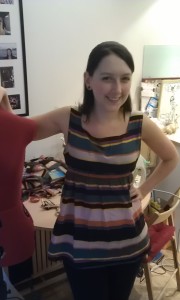 Today I wore a stripey little top that I’d cooked up a few nights ago. It was supposed to be a dress but when I washed the fabric the black stripes bled into the other stripes in places and I ended up with less than a metre to work with. Chuh!

Least it was only £1 a metre, courtesy of Jack’s Fabrics! You can even see some scraps left over in the background (ahem: I’m normally a lot tidier promise).

Amazingly for me my attempts to match stripes worked out well. Considering the variations within the patterns it took a while to figure out and I’m so glad it did. (My mental maths lets me down a lot.)

A girl at work said something nice about my top which is always appreciated. My boyfriend nearly convinced my to sew a huge bow to the front of the top but I thought I looked deranged so I’m glad I didn’t. He’ll read this later and I bet he’ll try and make out it was my idea in the first place. Bah, lies.

Now I’m going to cook up what I’ll wear tomorrow and possibly pinning something new like my Vogue 8723 pattern!

Got to be sewing something….

This site uses Akismet to reduce spam. Learn how your comment data is processed.

I’m Amy, nice to meet you! Take a look around and maybe leave me a comment. You can get in touch by emailing me at almondrock.wordpress@gmail.com